Salinity is denoted by an excessive amount of dissolvable salts in soil. Majority of the salt affected land has natural origins, such as geological buildup of salts in semiarid and arid regions. A range of soluble salts, generally chlorides of magnesium, calcium, sodium and to a lesser extent, sulfates and carbonates are released by weathering of parental rocks. Of all the released salts, sodium chloride is the most plentiful and soluble. Deposition of rain and wind carried oceanic salts is the other reason of salt accumulation. Distant from usual salt stress, a considerable fraction of newly cultivated agronomic area has turned out saline because of irrigation and land clearing practices, both of which cause salts accumulation in the root zone due to rise in water table. Out of 1500 million hectare of area cultivated by dry land farming, two percent is distressed by other forms of salinity to various scales. Twenty percent of the existing 230 million hectare of irrigated area is distressed by salt stress.

Salinity affects the crops in two phases. Throughout the initial stage of salinity, plant growth is limited as a consequence of osmotic stress resulting from low soil water potential and high concentrations of solute. Turgor is not affected during this phase, however due to root-derived signals cell wall acidification decreases causing reduction in cell wall extensibility. Through the second stage of salinity, increasing ionic concentrations in plants may lead to toxic levels. In saline soils, commonly sodium and chloride ions are the most prevalent among all ions. Growth inhibition of salt sensitive species and adverse effects on the plant metabolism may be depicted by both sodium and chloride ions. High concentrations of chloride are toxic to legume species while grasses are particularly sensitive to sodium ions. The extent of growth of shoot declines considerably through the first stage of salt stress that instantly follows when the buildup of roots salts enhances to an alarming level resulting in challenging water extraction by roots. As compared to root growth; shoot growth is more susceptible to osmotic stress caused by salinity, possibly due to the fact that a decrease in the area of leaf in relation to growth of root reduces water. 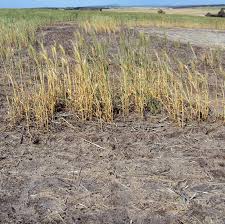 Salinity in soils markedly declines the production of majority of crops. Since sodium chloride is highly dissolvable and prevalent, therefore mechanisms have developed in most of the plants in order to normalize sodium chloride buildup as well as in its preferential selection in contrast of salts generally found in lesser amounts, for instance potassium and nitrate ions. The naturally occurring plants inhabiting the soils with high salt content, called halophytes are capable to retain this elimination at elevated salt concentrations as compared to rest of the plants. Plants inhabiting arid and semi-arid zones have evolved low soil water potential tolerance mechanisms, owing to high salinity of such regions. All over the world, soils with increased salt content are responsible for huge declines in the production of most of the crops. Salinity problem is enormous, as approximately 1000 million hectare of land which is equivalent to seven percent of all land area is affected by salinity. About five percent of the 1.5 billion hectare cultivated land is salt distressed. Frequently as a result of poor farming drills, the salinization problem is amplifying. One-third of the irrigated land is critically endangered due to high salt content.