Journalism is a much acclaimed profession and has its peculiar place in society. Journalists are like a bridge between common people, high officials, beaurocrats and artists. They transfer news, information to the entire population as soon as possible. People believe what they say, write and give them respect. Journalism is not an easy field for everyone. It needs dare courage and strong personality. A person who is able to report conflicts bravely can be a journalist. Brave means he must be able to stand against wrongdoings, infidelity and should be man of strong ethics and compassion.

Journalists all over the world face different kinds of dilemma and situations. Because sometimes they are highlighting issues that affect influential people image. That’s why they are threatened and face intransigence. In this situation a very strong strategy and spunk is needed. Students who are studying journalism are a bit startled of this profession. And some avoid joining this profession because of its image and some cases in which journalists are killed by the opponents. Anchors, news casters, weather forecasters, host of different channels have taken degrees in journalism but they are not under red line. Reporters and investigative journalists are mostly the sufferer. 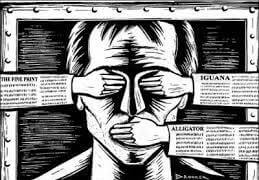 Respect journalists and give them freedom.

Journalist should have to be responsible in conveying information to avoid any bad consequences. Sometimes they are also in hurry to break the news without getting its authenticity. In this way people stop trusting them. So always be patient and transfer it to others after confirmation. Journalists live a very high standard life and they have links with many important and affiliated people. Affluent people are the ones who want to keep in touch with them. Some offer bribe to hide their activities. But I think a person of strong character always avoid such offers and knows his/her rights and obligation. This profession is so respectable because they reveal bad acts and make people aware about what is going on around them. So always show both sides of the picture. So the nation can decide well. Journalist and reporters should avoid being biased and exaggerations to maintain believe among the nation.