Say No To Corruption

Corruption is a word that we hear every day and sometimes it is happening near us. But we stand quiet and then at the end face its repercussions. It is so much alarming that it ruins the whole society and then country. Nations and generations suffer from its destruction. It actually starts from upper level and then silently hit lower level people as well. Some people do work only on the basis of bribe and this is the foundation of corruption. In every field there are few honest people left who say no to corrupt system.
Basically Pakistan is a developing country and many people live below the poverty line. These people want to get their rights but no one listen and considers their problems. So they also take bribe whenever they get a chance. Clerks are also involved in corruption. This also creates a difference in which corruptors take all the edge in the form of money and the poor people deteriorate and remain poor all life. The one who have links and they are influential, they don’t let people stand against them. In this way development of country stops.Because most of the people are involved in wrongdoings.People hesitate in doing work and wants to get more and more money. 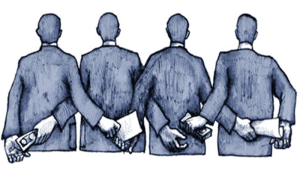 Say no to corruption and bribe.

The country in which people thinks only about their own perk are the ones who are affecting the whole society. People should think collectively to resolve the issues so that not only rich but also poverty-stricken people are given their rights. If you see anyone doing corruption they just take a stand and reveal his deeds. If he is punished then the next time no one is able to do corruption.
Man power is needed in every country for development. People ae given money of their work done. If they know that they get money by just making links or threatening then they leave hard work and start earning from other sources. This will ruin the generation and other countries stop giving respect because they know that the people belonging to this country are lazy and dishonest. This is insulting for the nation and it takes years to make good name but just one wrong act to destroy it. So say no to corruption if you love your country and people.