This phase of architecture which has a very few remains left appeared in the south west Asia in 10000 BC. Tools were gradually developing as the needs of people started emerging. In Neolithic times people used mud, timber, mud bricks, and hay brick, clay and tree trunks. The construction was very simple in function as well as in the entire look. They made single story buildings mostly one room for a single family. The structures were not complicated. Use of windows by means of ventilation was in the process of developing. The corners of the rooms were mostly used to store food and other daily life products. 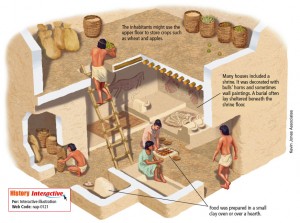 Logs were used for purpose of flooring and similarly    clay for the sealing. Wooden logs were also used for  supporting the structural background. Neolithic  Houses were only used as residential, there was no  other purpose. This also refers to the fact that these  people were not religious or there temples were destroyed due to reasonable reasons.

The Neolithic period treated people to make communities meaning, it was the initial phase of the human race in which they started grouping. Grouping made people travel and imposed their thoughts to make their living somewhere else. This revolution then gave birth to agriculture and farming which further converted into architecture.

The tools that these people used were bone and stone tools made by polishing and grinding with the help of other big rocks. Very wide and heavy Rocks were also used to make roofs. It was almost impossible to carry these rocks as the wheel was not yet discovered. It seems that only man power was used to carry these rocks after they were thrown into rivers and then traced. This also concludes that the humans in Neolithic times were very strong.

The Neolithic has many phases according to its developing steps. This Era is considered as the end of Stone Age where the proper human civilization began. There are a very few elements of architecture that relates the old human thought to a newer and more predictable architecture. Keeping in mind that our early generation has blessed us with techniques by the help of which we have created such huge structures despite the fact that our physical empowerment kept decreasing.

The Neolithic period ended when iron and bronze were introduced for building and fighting purposes. The houses that were built purely from rocks exists but there are very few remains of the people who built with timber, mud and clay.

Man today with its brain has the power to almost achieve any kind of goal. But still it was and it is even now impossible for us to do things without tracing what our ancestors did to survive. Many of these questions comes to our minds that how we managed to create such extra ordinary brilliant mind sets for gathering data and manipulating it with diverse situations. This only leads us to the past because no matter what we cannot take a glance at what is going to happen next.